Visit of the Führungslehrgang I, Swiss Armed Forces 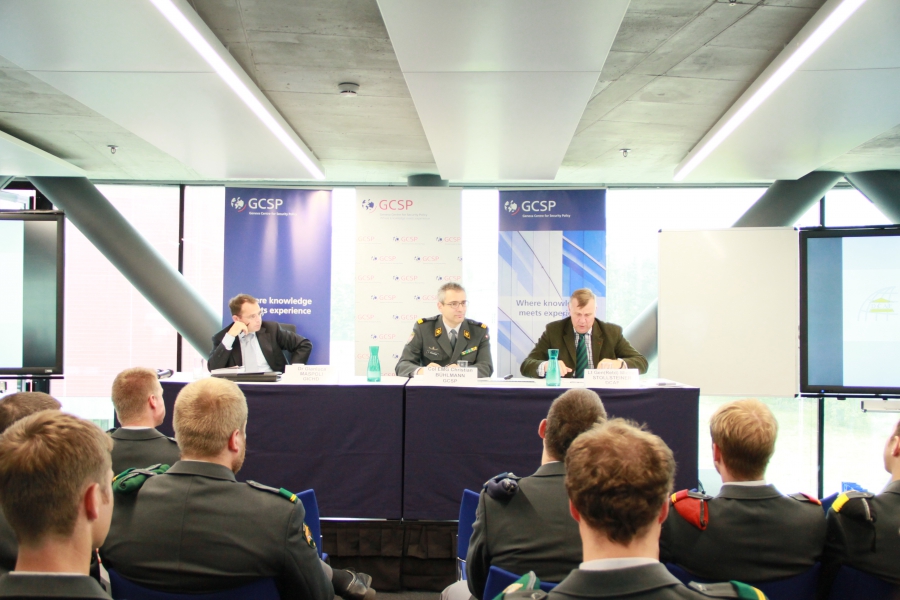 In Switzerland, future unit commanders of all branches of the Swiss Armed Forces are trained at the Command Course I (Führungslehrgang I – Stage de formation au commandement I) located in Bern. They learn topics such as leadership, tactics, combat engineering, and training guidance. Likewise, they are taught in-depth basic knowledge of the organisation of the armed forces, security policy and military history. Regular NCOs (Berufsunteroffiziere – sous-officiers de carrière) attend the FLG I as part of its continuing vocational training in order to be promoted (Stabsadjutanten – Adjudants d’état-major). The course takes place three times a year.

The last day of the course is dedicated to the global dimension of security policy. The participants come to Geneva to learn about the security policy dimension of ‘International Geneva’, the role and the functions of the three centres created by the Swiss government (GCSP, the Geneva International Centre for Humanitarian Demining (GICHD), and the Geneva Centre for the Democratic Control of Armed Forces (DCAF)). They then visit the Palais des Nations and the International Committee of the Red Cross (ICRC), where they have a discussion with representatives from the institution.

On Thursday, 2nd of October 2014, the course, under the direction of its commander, Colonel (GS) Philipp Imboden, visited the GCSP. They were received by Col (GS) Christian Bühlmann, Head of the Regional Development Programme, seconded to the GCSP by the Swiss Armed Forces, who presented ‘International Geneva’ and the GCSP. Lieutenant-General (Retd) Michel Stollsteiner, Senior Defence Advisor to the Director of DCAF and seconded by the French Armed Forces, presented the centre within the context of security sector reform (SSR). Finally, Dr Gianluca Maspoli, Advisor for Security and Development, explained the necessary alignment of mine action with broader security and development processes.

The commander of the FLG I, Colonel (GS) Philipp Imboden, thanks General Stollsteiner for his stimulating presentation of DCAF

Concluding the module, Colonel Imboden made clear that he was very pleased with this sequence. Convinced that knowledge of future captains must go beyond the tactical level, he advised them not to lose sight of the goals of security policy and to be aware of the importance of cultural diversities.

Plus dans cette catégorie : « Representing the GCSP at the PIR Center in Moscow Forgot to Smile [REPOST] Opening The First GCSP Orientation Course for the Defence Attachés in Colombo »