Representing the GCSP at the PIR Center in Moscow

Was in Moscow, Russia, last week-end to receive an award on behalf of the GCSP from the PIR Center. The PIR Center has kindly awarded the GCSP a prize “For Educating the New Generation in the Area of Non-Proliferation”. Met interesting and amazing people.

The globes of PIR Center are awarded to the Russian and foreign statesmen and community leaders, scholars, experts, journalists and philanthropists, that have significantly contributed to the strengthening of the nuclear nonproliferation regime, addressing particular nonproliferation challenges, developing education and research activities in the nonproliferation realm. First globes were awarded in 2004 for PIR Center 10th anniversary. The second ceremony took place in 2009.

The Centre continued the tradition in 2014. On October 4, as a part of the celebrations of the PIR Center’s 20th anniversary, the Awarding ceremony took place in Moscow. Eight laureates have been selected in five nominations:

“For Strengthening the Nonproliferation Regime” Award:

-   The Head of the Center for International Security at IMEMO RAS, the Academician of the Russian Academy of Sciences, Alexei G. Arbatov;

“For Professional Coverage of the Issues of Nonproliferation, Regional and Global Security” Award:

“For Educating the New Generation in the Area of Nonproliferation” Award:

“For Continuing Support to Nonproliferation Research, Education and Publishing” Award:

“The New Talents in Nonproliferation” Award:

-   Permanent Mission of the Russian Federation to the International Organizations in Vienna Second Secretary, Roman A. Ustinov.

Christian Bühlmann, Head of the Regional Programme, received the Award on behalf of the GCSP. In his comment, Bühlmann express gratitude towards the PIR Center, acknowledging the fact that the CGSP feels extremely delighted for this award: Firstly, because the globe recognises the GCSP training competence.Secondly, because it is also a compelling sign of a long and constructive relationship between the two institutions. Finally, it is a sign of friendship.

Connecting this award with the inauguration of the Maison de la Paix one day before, Bühlmann explained that Swiss President of the Confederation, Federal Councillor Didier Burkhalter, stated that Peace is construction, and that peace needs action and willpower, reflection and mindfulness, friendship and a hearth. “This gift is a sign of friendship and a step in constructing peace”, concluded Bühlmann before congratulation PIR Center's Director Vladimir Orlov for the 20th Birthday of the Centre. 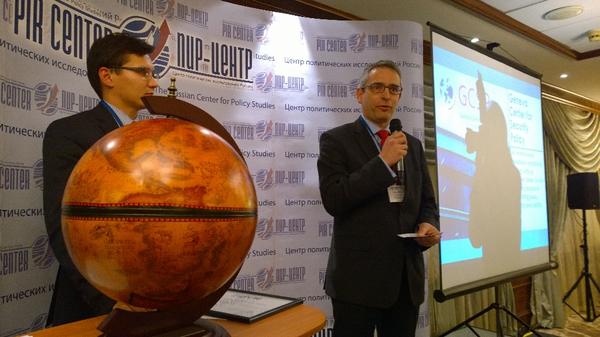 Plus dans cette catégorie : « 22 participants from 22 countries graduate from the 15th New Issues in Security Course (NISC) Visit of the Führungslehrgang I, Swiss Armed Forces »