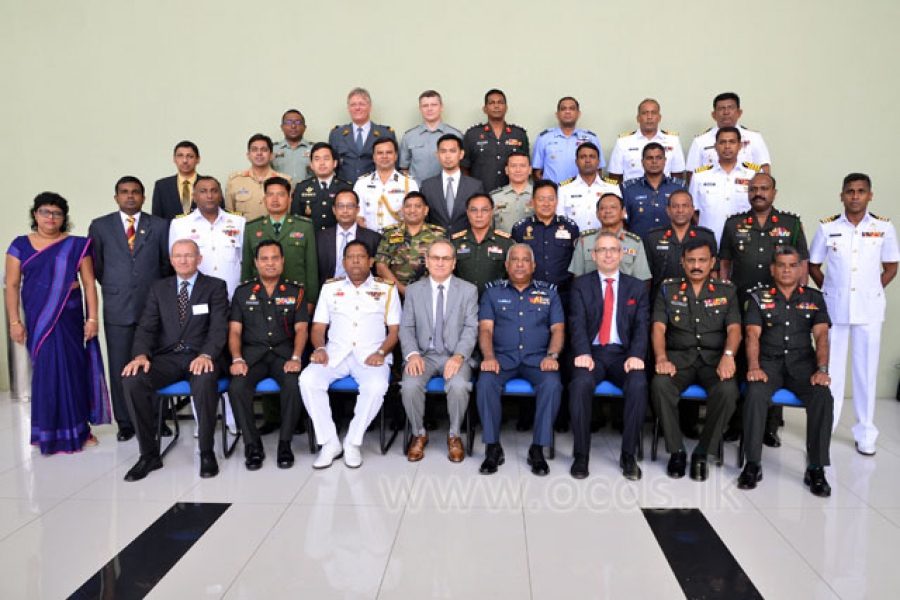 A five day Orientation Course from 05 to 09 December 2016 for Defence Attaché, Diplomats and Senior Officials involved in Defence and Diplomacy, designed by the Geneva Centre for Security Policy, Geneva, Switzerland (GCSP) with the coordination of the Office of the Chief of Defence Staff concluded at the Faculty of Graduate Studies of General Sir John Kotelawala Defence University (KDU) on 09 December 2016.
Chief of Defence Staff, Air Chief Marshal Kolitha Gunatilleke extended a warm welcome to the Chief Guest of the inaugural ceremony His Excellency, Heinz Walker-Nederkoon, Ambassador of Switzerland to Sri Lanka and Maldives, Representatives of the GCSP and 26 course participants including 13 from South and South East Asian Countries.

The programme conducted by the intellectuals of GCSP along with prominent lecturers on Diplomacy and International Relations in Sri Lanka who were coordinated by the Bandaranaike International Diplomatic Training Institute (BIDTI). The course focused on major international security issues, practical issues of protocol, application of international conventions and exercises with simulations.
This annual orientation programme has been arranged as the first Defence Attaché Orientation Course in the Asian region based on bilateral cooperation between GCSP and the OCDS in number of areas related to the field of International Peace and Security.
A Memorandum of Understanding was also signed between OCDS and GCSP by the Chief of Defence Staff Air Chief Marshal Kolitha Gunatilleke and Colonel (GS) Christian Buhlmann, Director of the Regional Programme, GCSP at the Office of the Chief of Defence Staff on 2 December 2016.
In a coinciding event, Lieutenant General (Retd), Christophe Keckeis, Former Head of the Swiss Armed Forces, called on Air Chief Marshal Kolitha Gunatilleke, the Chief of Defence Staff at the Office of the Chief of Defence Staff on 7th December 2016. Lieutenant General Keckeis was accompanied by Colonel (GS) Christian Buhlmann,Director of Regional Programme of the Geneva Centre for Security Policy (GCSP) Switzerland.
Certificates were awarded to the officers who took part in the programme by His Excellency, Heinz Walker Nerkoorn, the Ambassador of Switzerland in Sri Lanka, who graced the occasion as the Chief Guest for the presentation ceremony. Rear Admiral Jagath Ranasinghe, the Vice Chancellor of KDU, Representatives of the GCSP and senior military officers attended the closing Ceremony which was held at KDU on 09th December 2016.