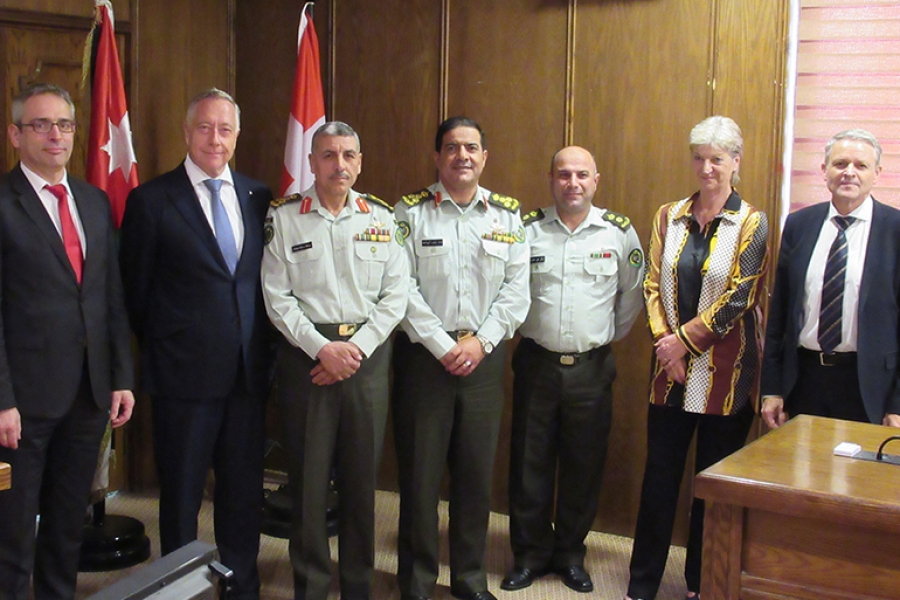 On Thursday, November, 8th, the Defence Attaché (DA) course in Amman came to a conclusion after a closing ceremony. 29 participants from 14 countries were awarded a course certificate from the hands of the Royal Jordanian National Defence College (RJNDC) commandant, Brigadier General Abdallah Al Shdaifat and General (Retd) André Blattmann, former Chief of the Swiss Armed Forces.

Colonel Christian Bühlmann, Head of the Regional Perspectives, thanked the participants for their positive engagement throughout the course, the staff from RJNDC and the GCSP for the perfect organisation, as well as the Swiss Federal Department of Defence, Civil Protection and Sport (DDPS) for their support. Brigadier General Al Shdaifat underlined the need for strategic perspective and the excellent cooperation between the two institutions.

The feedback from the participants showed that the course was very well appreciated. The mix of experienced-based lecture and practical activities was recognized as strength. The “exemplary DA tour”, where participants visited a battalion of the Jordanian Army Quick Reaction Force (QRF), the Zaatari refugee camp, as well as the King Abdullah II Special Operations Training Centre (KASOTC) was considered a highlight and very representative of a DA activities in collaboration with an accredited State. All in all, it was considered the best DA course in Amman.

The course was co-directed by Colonel Urs Amiet, GCSP, and by Brigadier General Azzam Alrawahneh, RJNDC. It was coordinated by Ms Deborah Zdravkovic (GCSP). This Course was Colonel Amiet’s last DA course, as he will leave GCSP by the end of the year to become a Defence Attache himself. The participants and the course staff thanked him warmly for his dedication and the successful direction of the courses.

Jordan news agencies have published many articles in Arabic articles on the course: