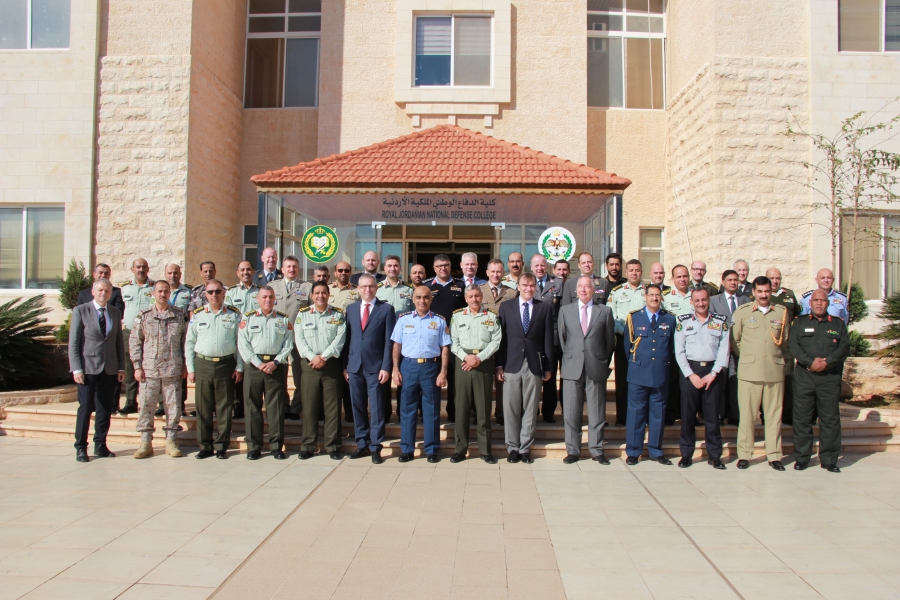 Participants to the 12th DA course in Amman RJNDC

Defence Attachés operate at the intersection of diplomacy, strategy, economics and public affairs. As their roles and missions are complex and evolving, it is important for new Defence Attachés to be properly prepared to take on this function. This course, organised jointly by GCSP and RJNDC, is funded by Federal Department of Defence, Civil Protection and Department of Defence, Civil Protection and Sport  of the Swiss Confederation (DDPS).

The courses began when College Commandant, Brigadier General Abdallah Al Shdaifat, described the geostrategic context and the need for strategic-level thinking. Ambassador Lukas Gasser, Swiss Ambassador to Jordan and Iraq, invited the participants to think not only in terms of Hard Power, but also to use Soft Power, the power of attraction. Before formally opening the course, Colonel Christian Bühlmann, Head of the Regional Perspectives Programme at the GCSP, thanked the courses stakeholders, underscored the Jordanian hospitality and motivated the participants to be active and to share their perspective on the issues discussed. “One can only understand a complex environment”, acknowledged Bühlmann, “by sharing and combining multiple perspectives”.

“One can only understand a complex environment“by sharing and combining multiple perspectives”.

Later, the participants began to work together in an exercise on global challenges. By the end of the day, a participant summarized the impressions of the group, stating his pleasure of “getting to know new friends and learning useful skills and tools”. The course is co-directed by colonel Urs Amiet GCSP, and by Brigadier General Azzam Alrawahneh, RJNDC. It is coordinated by Ms Deborah Zdravkovic. Lieutenant General (Retd) André Blattmann, GCSP Associate fellow, contributes to the course, which will continue until Friday, November the 9th.

The participants will develop their knowledge on regional security environment, as well as on the responsibilities and tools of a military diplomat. With the funding support from the DDPS, the GCSP, in partnership with renowned local institutions, organises this course each year in the following locations: Addis-Ababa, Amman, Colombo, Dakar, Geneva and Sarajevo.

Plus dans cette catégorie : « [REPOST] The GCSP hosted the 1st U.S Think Tanks Tour of Switzerland for a roundtable GCSP participants and staff offer gifts for schools at Zaatari Camp »