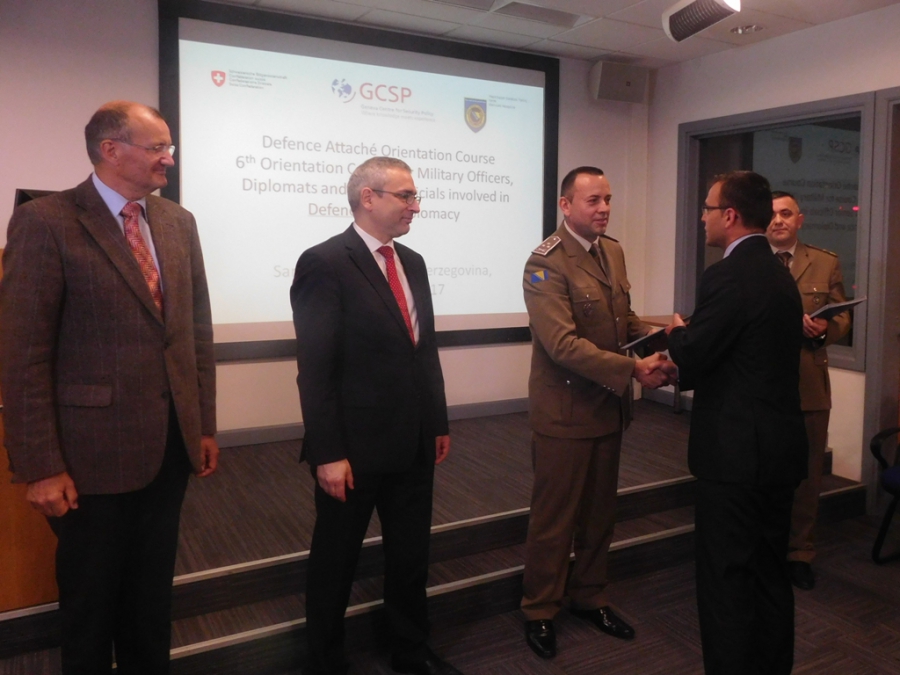 PSOTC and GCSP as a joint venture conducted the Defense Attaché Orientation Course at PSOTC from 22nd to 26th May 2017.

The PSOTC and the Geneva Center for Security Policy (GCSP) continue mutual cooperation based on their common interest in education and training excellence in the training of military officers, diplomats and civil servants involved in defense and diplomacy. Altogether 27 participants from thirteen countries (Albania, Bulgaria, Czech Republic, Egypt, Latvia, Macedonia, Mauritania, Montenegro, Poland, Romania, Slovakia, Turkey and Bosnia and Herzegovina) attended the course. During the course, participants had an opportunity to develop their skills and expertise of defense officials working in a diplomatic environment (such as Defense Attachés). The Course addressed modern issues and offered an opportunity to get an insight into contemporary security and geopolitical landscape with special focus on security issues related to the Balkans. Also, participants were provided with practical training in diplomatic activities as well as other areas relevant for their future work. Course participants were honored by being lectured by current and former ambassadors, ministers, defense attachés, embassy representatives, representatives of IOs, and professors from universities in Bosnia and Herzegovina, as well as representatives of GCSP and PSOTC. At the closing ceremony participants were addressed by GCSP Representative COL GS Christian Buhlmann and PSOTC Commandant, COL dr. Jasmin Čajić who congratulated the students and used this opportunity to express their support to the current course and all similar activities whose goal is to reinforce the role of military attaches deployed around the globe.

Plus dans cette catégorie : « [REPOST] PSOTC Hosted guest speakers on Defence Attaché Course at PSOTC GCSP on display at the Mission of Switzerland to NATO »